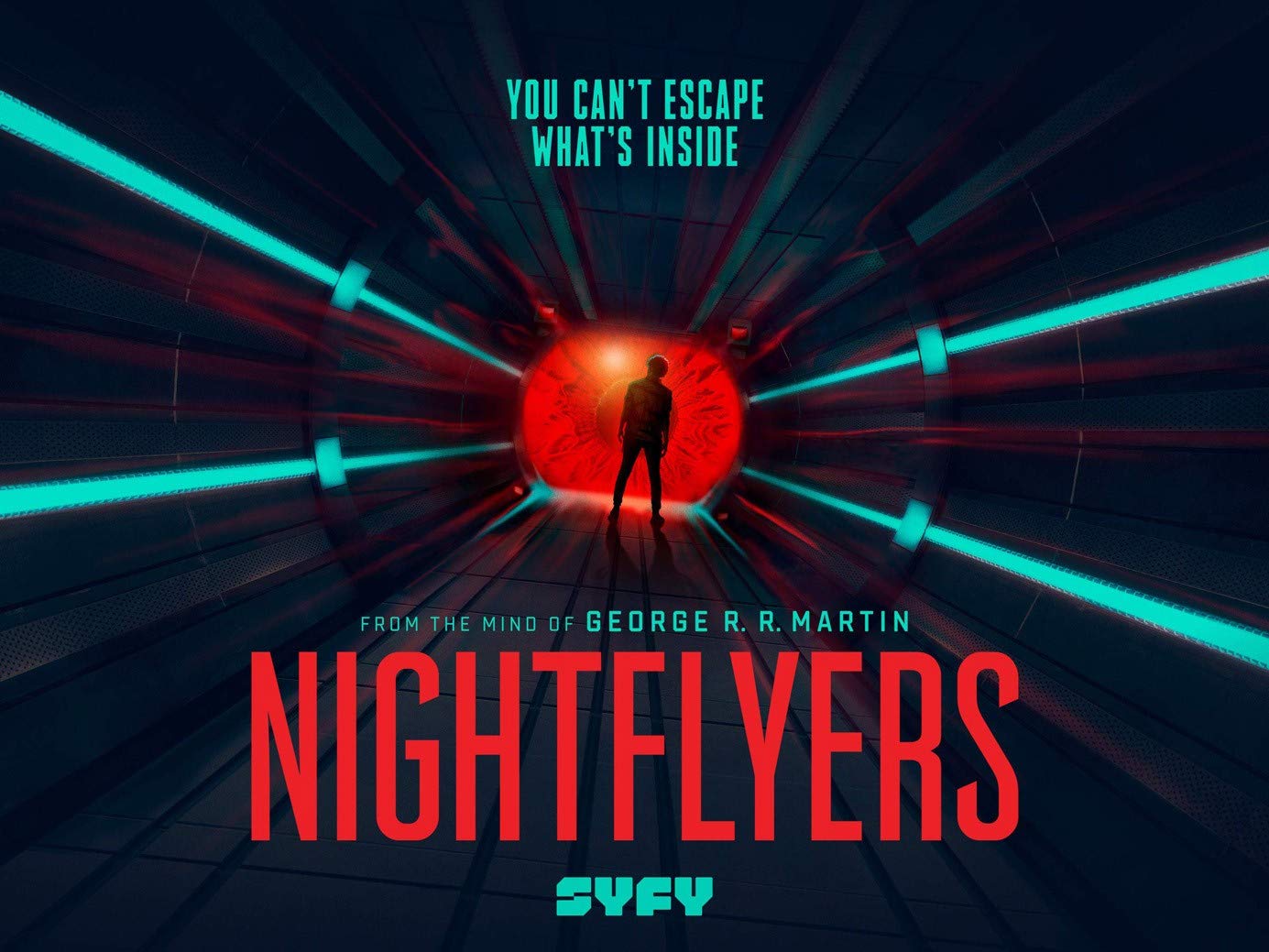 Nightflyers is a show that kept popping up on Netflix. It had that horror-y sci-fi vibe that intrigued me… so I added it to my queue. After watching the trailer, my husband was on the fence about the show… but I managed to talk him into watching it with me anyway.

He made it one episode before it was too much for him.

In all honesty… now that I finished the season… my life would have been just fine had I stopped then too. This was NOT one of my favorites. In fact, I didn’t like it. I’d be happy to never watch it again… which isn’t something I say often. But there you have it.

When I started watching Nightflyers, I had high hopes. Especially when the name George R. R. Martin flashed across the screen. After all, he did write that hit series Game of Thrones. But now that I think about it… I’ve never watched Game of Thrones and therefore didn’t really know what to expect. Maybe Nightflyers is more George R. R. Martin than I realized because of my lack of firsthand experience.

But first… the trailer.

This story is based on a short story written by George R. R. Martin. I think basing an entire television series off of one short story might have been where things went wrong in the first place. Maybe Nightflyers would be better suited as a movie… or as one of those books that falls behind the bookshelf and collects dust for eternity.

You can tell I didn’t like it, can’t you?

Don’t get me wrong… I love a great first contact story. Plus, I love science fiction horror. I love ships that go out on missions where things go wrong and weird stuff happens. I even love the types of movies and shows that take a new approach and really make you think and analyze them… But these things have to be executed properly in order for them to come together in anything but a senseless gorefest.

There aren’t many movies or shows that I don’t like. I’m generally easy to please. Typically I need to like the characters, the premise, and the execution. But maybe it’s not that easy after all. Now, if you haven’t seen the show and don’t want any spoilers, this is probably where you should stop. If you couldn’t care less either way, then go ahead and read on.

We start off watching a scene taken out of context. From the looks of it, there’s a madman on the loose and some sort of doctor takes her own life. When I saw this opening scene, I incorrectly made a lot of assumptions. It happens. I thought that something had made this guy crazy and he was hunting down everyone on the ship. That was wrong. But let’s rewind.

We start off seeing the crew of a ship readying themselves to depart on a first contact mission. Someone is out in the depths of space and our male lead is hopeful that they hold the answer to Earth’s problems. Only they’re not answering us after sending information their way. So a ship and a crew sets out to “poke the beast” as it were to get a response. But the closer they get… the stranger the events on the ship become. I mean… it seems like it’d be a really great story… but I think there was just TOO much going on.

First off… we have a captain who’s not really there. He’s a projection. Honestly, this doesn’t seem like a BAD thing for the captain of a ship to do. It helps keep a layer of protection against anything that may happen to the person who’s supposed to be in charge of the ship. So I get it. But then we find out that buried in the ship’s computer is the captain’s mother. Only she’s fragmented into two versions (or more?) of herself: a little girl who’s afraid of her father, and a cruel woman who originally captained the ship. So that, combined with a character who jacks into the ship to interact with it puts us in a kind of Matrix type situation where the edges of reality blur.

We also have a high-powered telepath on board. So, when things start to go wrong… the crew can’t differentiate between what the telepath is doing and what the woman who built herself into the computer is doing. Either way… someone is screwing with things they shouldn’t be…

Down the Rabbit Hole

That’s all just the tip of the ice burg. We also learn that the male lead’s daughter is dead and his wife is undergoing memory therapy to forget both the dead daughter and her living husband. But then… the doctor (the one from the first scene) happens to be the husband’s ex lover… who was once pregnant with his baby. Only she had the pregnancy terminated when the main character chose his wife over her. So, as you can see, we’re getting into some pretty complex story lines. But when you try to follow the relationships of the characters, the rug is quickly ripped out from under you as the characters go a different way entirely.

In one particularly graphic scene (for me anyway) two other crew members have a forbidden baby (I guess babies conceived in space are supposed to be terminated). They ignore the rules and carry the pregnancy to term but our telepath says the baby sounds like a million little voices and that he’s sorry to the couple when they ask him to listen to their baby’s voice. Then, they rush to the doctor and the baby is barely alive at that point (if at all really) so they induce labor.

The baby is born still, but then almost immediately decomposes into a bunch of mold spores which kill the doctor first (even though this happened while the mother was holding the dead baby). They quarantine the labor and delivery room and try to find a cure, but ultimately fail. So we have the mother and the Captain locked in this room and they issue a decontamination protocol… which kills the mother, but not the captain because it turns out he’s some kind of android.

So back to the other love affair… our holograph turned android captain is sleeping with this woman. He’s then killed, which upsets his lover. But she digs the eyeballs out of his head to get into a secret room where she finds the real captain floating around in a chamber like Gollum in the Dead Marshes. But that’s not all folks. By this point in the movie, computer-program-mommy has broken out of the Matrix and is running around in Lommie (Matrix-girl)’s body. She tells the captain and his main squeeze that not only is the captain a poorly executed clone… but that the genetically engineered woman’s DNA is also from her. So, they’re essentially clone-siblings who’ve been running around having sex (sort of… I mean one was just an android after all).

Oh… and the alien they were going to make contact with? Yeah… it’s a giant jellyfish out there in space, bombarding everyone and everything with some kind of radiation. I mean… I kind of liked that aspect of the story because my brain frequently ventures into “what if space is more like the ocean than we realize” territory… but the part where our main character flies a pod up the thing’s butthole and magically appears back at home with his daughter still alive is… well, it’s fricken weird. And maybe he didn’t teleport back to Earth. Maybe he’s dead. Or, maybe it’s all in his head. Maybe he never left and this is just the type of dreams you have when you take Ambien before bed… I don’t know.

When it comes down to it… the whole show was just too much for me.

Oh, and don’t forget about our crazy killer at the beginning. It was his baby and girlfriend in the mold-spore incident… so I get why he went off the deep end. What I don’t get is… when the doctor (who was also secretly a telepath) offs herself, everyone just lets him go back to his room until they need his help and it’s like nothing ever happened.

Personally… I think they just tried to cram as much weirdness into Nightflyers as they could and they didn’t do it well. It was a gory acid trip with the SyFy channel’s stamp of approval on it (probably because of the association to George R. R. Martin because there’s no way this piece of garbage would have been created without some big name attached).

So if you’re into stories that don’t make sense, gore for the sake of being gore, and no characters following a reasonable thought process, then Nightflyers might be the show for you. But be warned… there are a lot of messed up things crammed into this sardine can of “what the fuck did I just watch?” And I didn’t even cover the cannibal women who milk sperm out of men to make deformed clones for FOOD.

Go Watch Something Else… ANYTHING Else Other than Nightflyers

Seriously… there are a million other shows to watch out there and even the worst of those is better than the hot mess that is Nightflyers. For once, I’m glad SyFy canceled a show.